When I was a child, I would wander the nocturnal streets of my microscopic empire. It was during that time, listening to the rocking ballads of the ’90s and gazing at the cosmos revolving above me, that I learned the secrets to life, which do not bear telling here. Shortly thereafter, I went into the world. This is my account.

Being a professor, I may not write regularly. I may be busy writing dissertations on the nature of energy drinks. I may be experimenting with my hybrid blueberry bushes. I may even be inventing a new sex position. That being said, I will plan to write a new post weekly.

I fucking swear a lot, I write about my experiences with drugs and sex, and I generally don't give a shit. I operate on the idea that if you're nice to me, I'll treat you with minimal contempt. This blog will describe my adventures, hopefully with a decent amount of hyperbole and sarcasm.

We were looking for something fun to do for the weekend, so we checked the listings. We saw a band’s name that struck our interest. Hoss and I did a little Googling, as we are wont to do.

And we saw their motherfucking video right here:

It goes without saying that we were hooked. We dressed up, (they seemed like the kind of band you would want to dress up for) Hoss in a golden vest and me in my leather daddy jacket and my Dresden Dolls-style stockings. I had blue hair at the time, so that helped too.

We went to the bar across from the street to drink a couple margaritas and dry-heave a little. Hoss was drunk and feeling generous, so he gave his flask of gin to houseless woman, and we got into the show, stumbling, ready to party.

And we motherfucking did.

Straight up, MarchFourth Marching Band was the coolest show that I have ever seen, and Hoss agrees. There were motherfucking acrobats, contortionists, burlesque dancers, and maybe some fire-eaters? I don’t know, I was wasted.

The band had a very ska-y sound, and it was shit that you could skank to with abandon and loss yourself in. They played as if they were having fun, and that transmuted to the crowd. And, when they played their cover of Nirvana’s “In Bloom”, I completely lost. My. Shit. The brass was a explosive and my ears were bleeding with awesomeness. The performance artists added an element of authentic, human spectacle that can’t be achieved by the light shows and pyrotechnics of most shows. 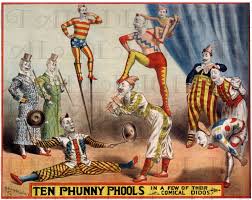 People had been drinkin’, so they started cheering it too. The band noticed, and they cheered it back to the crowd, and started playing with a new fervor. They rocked our asses off again.

Then something magical happened. A fucking unicorn – kidding. No, the drummers jumped down from the stage into the audience. So, not only were there was great music and great performances, there was also a transgression of that invisible wall between the talent and the fans. The musicians were in the trenches, beating on the drums, in range for the crowd to blow kisses to them.